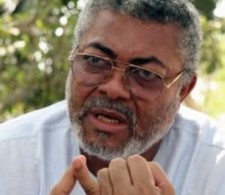 Former President Jerry John Rawlings has condemned the transfer of former Ivorian President Laurent Gbagbo to the Hague to be tried by the International Criminal Court, saying the hasty procedure could be rightfully described as abduction”.

In a statement issued in Accra on Sunday, he said his suspicion grew even more when the prosecuting attorney, claiming to be targeting six officials in Cote d’Ivoire, “unduly focuses on Gbagbo, the one who is least likely to escape due to being already in custody”.

“I have learnt with dismay reports that deposed President Gbagbo of Cote d’Ivoire, has been transferred to the International Criminal Court (ICC) on Tuesday, November 29th, following a speedy indictment, in total violation of relevant international code of procedures and in total disregard for the demands of peace in Cote d’Ivoire,” former President Rawlings said.

“This eagerness to indict and transfer Gbagbo, who did not run in the face of the bombing of his palace like a common criminal, defies logic and the quest for true reconciliation and sustainable peace in Cote d’Ivoire,” he added.

Former President said after fifty years of independence, Africa should have all the know-how to bring justice to its own citizens and do away with imported justice.

He said: “What kind of prosecution would rather be in haste to bring to justice the victim of an attack, and be lenient on the perpetrator of the attack?

“No one is trying to evade justice. But when such justice is drenched in a sea of humiliation and abuses, so as to be governed by self-righteous hatred with its untenable logic, it only befits human conscience to stand up against it for the good of all.

Former President Gbagbo was detained after a brief but bloody civil war that erupted in Cote d’Ivoire following a presidential election that was claimed by him and his rival Alassane Ouattara, who was adjudged by the UN to have won the disputed poll. GNA