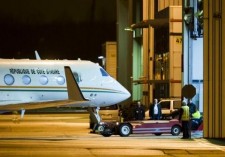 Gbagbo arrived in The Hague Wednesday and is expected to make his first appearance before the ICC on Monday.

He is charged with four counts of crimes against humanity allegedly committed during post-election violence in Ivory Coast between December 2010 and April this year.

Chief party spokesman Deisire Boussi says that, as a result of the ICC transfer of Gbagbo to The Hague, the party is withdrawing from Ivory Coast’s national reconciliation process.

“First of all, it’s been decided that the procedure was quite illegal because, for the ICC to transfer President Gbagbo, it should have taken around 10 days.  This is the time required for such a procedure.  Secondly, we are resigning from the reconciliation process,” he said.

“Mr. Ouattara is playing the game of ‘Tom and Jerry,’ and we [are] no more interested in such a game because we have to be very responsible and, when you are head of state of Cote d’Ivoire, you do not need to play any tricky game with the people,” Boussi said.

He says the Ivorian Popular Front party is calling on all democrats the world over, especially from Cote d’Ivoire and Africa in general, to rally in the coming days for democracy, which he says is dying in Ivory Coast with the transfer of Gbagbo to The Hague.

“If you have to go, let’s say by American law, you cannot sentence at once someone who is supposed to be guilty.  For us, Gbagbo has been sentenced already without sin.  The prosecutor didn’t go through the inquiry process,” Boussi said.

He said much of the Ivorian capital, Abidjan, was shocked Tuesday when news broke of the transfer of Gbagbo to The Hague.

“The streets were quite empty.  Everyone was eager to go home, that is to say, there was a very gloomy and heavy atmosphere, or the mood was not good.  People were not expecting Ouattara to let Gbagbo go to the ICC,” he said.

Boussi said Gbagbo supporters have no plan to engage in violence because of the ICC action.  Instead, he said they intend to use the legal process to get justice.

“There is nothing to do except work in legality and work in the democratic path.  We are not going to take any violent action.  We know we are expected to do such thing, but we are not going to do [it] because there is trauma in the Ivorian population since we asked the international [community] to count the votes that people cast,” Boussi said.