US Senator Inhofe’s Letter to President 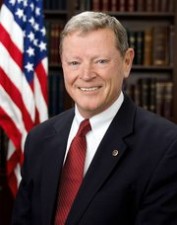 Mr. President, I want to give you the latest on the situation in Cote d’Ivoire, and I can only say that it continues to be a targeted genocide against supporters — or perceived supporters — of deposed President Laurent Gbagbo.

This will be my sixth time speaking on the Senate floor on the tragedy in Cote d’Ivoire in addition to the statements I made at a hearing last week before the Senate Foreign Relations Subcommittee on Africa.

I said then and I say now that rebel leader Alassane Ouattara is still carrying out reprisal killings by his ‘death squads’ roaming the streets of Abidjan, Cote d’Ivoire.   You don’t have to believe me.  This is according to a just released report by Amnesty International.

As reported in yesterday’s Guardian, “Reprisal attacks are still being committed by forces loyal to the president of Ivory Coast, six weeks after he came to power vowing peace and reconciliation, Amnesty International warns today.”

“Alassane Ouattara, championed by the west during a deadly post-election conflict, has failed to condemn atrocities against real or perceived supporters of ousted president Laurent Gbagbo, the human rights group said.”

“Amnesty also criticised the UN mission in Ivory Coast for ignoring pleas for help and failing to prevent a massacre in the western town of Duekoue.”

Amnesty International reports that “a manhunt was launched against Gbagbo loyalists in Abidjan and several senior officials close to him were beaten in the hours after his arrest.”

“In the west of the country, thousands of people fled their homes and many are still living in the forest, too frightened to return.”“

Gaetan Mootoo, Amnesty’s west Africa researcher, said: ‘Human rights violations are still being committed against real or perceived supporters of Laurent Gbagbo. Alassane Ouattara’s failure to condemn these acts could be seen as a green light by many of his security forces, and other armed elements fighting with them, to continue.  Ouattara must publicly state that all violence against the civilian population must stop immediately.’”

“Attacks against villages inhabited by people belonging to ethnic groups considered supporters of Gbagbo continued in the first weeks of May, Amnesty said.”

“Between 6 and 8 May several villages were burned and dozens killed.  Ouattara’s republican forces justified these acts by saying they were looking for arms and Liberian mercenaries.”

This justification for random murder and rape is ridiculous, Mr. President.  These cowards are now just using this as an excuse to justify their genocidal acts.

The Guardian article went on to say that “an Amnesty delegation spent two months in Ivory Coast, gathering more than 100 witness statements from people who survived the massacre in Duekoue and neighbouring villages on 29 March.”

“All the statements indicated a systematic and targeted series of killings committed by uniformed republican forces [loyal to Ouattara], who executed hundreds of men on political and ethnic grounds.”

“Before killing them, they asked their victims to give their names or show identity cards, Amnesty said.  Some of these cards were found beside the bodies.”

“A woman who lived in Duekoue told researchers: “’They came into the yards and chased the women.  Then they told the men to line up and asked them to state their first and second names and show their identity cards.  Then they executed them.  I was present while they sorted out the men.  Three young men, one of whom was about 15, were shot dead in front of me.’”

“Amnesty’s report also accuses the UN mission, which has a base less than a mile from Duekoue, of fatal inertia.”

Mr President, I would also like to give you an update on my call for asylum for Cote d’Ivoiran President Laurent Gbagbo and first lady Simone Gbagbo as a way to end the ongoing bloodshed, and begin the reconciliation process that this country so desperately needs and deserves.

“The party’s interim president, Mamadou Koulibaly said, ‘Conditions of security, of the release of our comrades, must be met, say our activists. Then can we seriously consider joining the government.’”

Koulibaly also said that “we talk about national reconciliation and truth, but at the same time we talk about justice.  Our activists questioned whether it will be real justice or the justice of revenge.”

Mr. President, this is my sixth appearance on this Senate floor, and I want to urge again our State Department to use its power and influence to allow the reconciliation process to move forward by allowing the Gbagbos to go into exile.

At least half the population of this war ravaged nation supports the Gbagbos, and I have knowledge of one African leader who is willing to accept the Gbagbos right now in his country.  The State Department is aware of this offer.

The U.S. has performed such a role before in 1986, when, under the Reagan Administration, Haiti’s “Baby Doc” Duvalier was sent into exile in France.  This could be an important step towards beginning this process of reconciliation.

I also call upon the United Nations and French government to demand an immediate end to rebel leader Ouattara’s death squads roaming the streets of Abidjan, killing, or as they call it “disappearing” supporters of President Gbagbo.

This is the only way to end the ongoing slaughter.